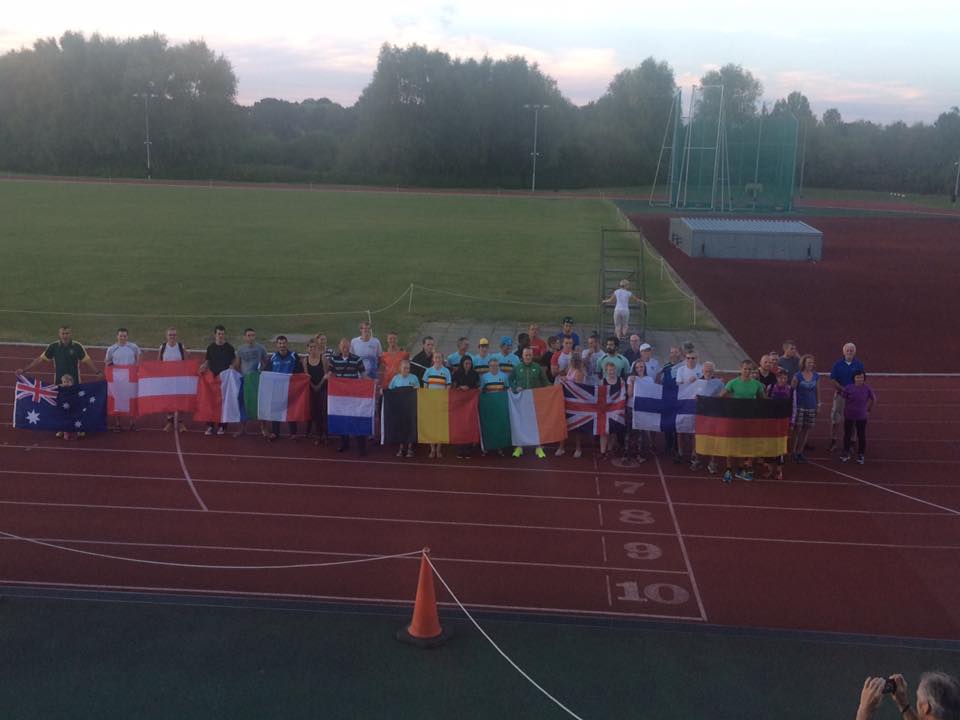 From left to right : Laura Groenendijk (NED), Nikky van Buuren (NED), Kate Happee (NED), Marit Bakker (NED), Bonnie Liefting (NED)
10.08.12 : Outdoor Men TOP-100 List by event has been graciously updated by Lukas van der Storm !
.
24.07.12 : Women statistics (TOP-100, National & World records) have been graciously updated by Maren Schott !
.
N E W S :  (July 2012)
.
PETER CLARKE : An icosathlete as a torchbearer !
.
Peter has been selected to be a Torchbearer in the London 2012 Olympic Torch Relay by Lloyds TSB.
Pete has been a qualified Track and Field coach for over 45 years with schools and clubs, and in 2010 was invited to be President of the Dorset County Athletics Association. Although he supposedly semi-retired 2 years ago, he continues to turn up every week on Club Nights to coach the youngsters, many of whose parents he also coached. He has organised numerous competitions, including the National Schools Cross Country Championships at Budmouth, and officiated at countless other events in the South West. Other successes include many years Team Managing for Dorset Schools, and as Race Organiser for the Weymouth 10. He has competed in over a hundred marathons and ultras, including 17 Londons, and currently holds the world best Veteran Age Group score for the One Day Icosathlon. Pete has given a huge amount to the community and carrying the torch would be a wonderful way to thank him.
.
Original article :
http://www.lloydstsblondon2012.co.uk/en/In-your-community/Olympic-Torch-Relay/Nomination/?nid=865370cb-d2e4-47cb-8250-d70c5fef2c50
L A S T    C O M P E T I T I O N :
.
23rd IAUM World Championships 2012 (Icosathlon & Tetradecathlon)
.
30th June & 1st July 2012, Turnhout (BEL)
.
-> www.icosathlon.be <-
.
.
Full results available on the following link : http://www.ico.rietvelden.com
.
More updated information on : http://www.facebook.com/events/271204966264621
.
. The American Ashton Eaton (who is already the world record holder of indoor heptathlon) broke the world record in the decathlon during the U.S. trials held in Eugene (June 22-23).
The new record is 9039 points against 9026 points achieved in 2001 by the Czech Roman Sebrle.
.
IAAF Day 1 report
.
IAAF Day 2 report
.
U.S. Trials results
.
*(DB) : Best ever in a decathlon
Published by Cédric
commenter cet article …